The 10U Lady Knights started the 2017 summer season as an inexperienced squad. Only a third of the team had played travel ball before and for most of the rest, they only had one season of In-House league under their belt. The season opener was against the Smithtown Bulls and the Lady Knights’ inexperience showed. The Bulls dominated the Lady Knights from the first pitch and raked up 13 runs in 3 innings to trigger the mercy rule. The Lady Knights could only muster 1 hit and finished the first game scoreless.

From there, the season didn’t improve as the Lady Knights proceeded to drop the next 3 games to Huntington and Longwood to start the season 0-4. Prospects for the season looked bleak but this group of girls was tougher than they appeared. The tide turned in Game 2 of a double header against Longwood. With a 1 run lead after 3 innings, the Lady Knight’s bats came alive scoring 8 runs in the top of the 4th and then never looking back to secure their first win 20-9. The hitting was led by Sammy Schifellite who went an impressive 4 for 4 with 3 singles and a double, third baseman Julia Beaury had 3 RBIs and catcher Julia Kelly had 8 steals, 3 of which were home. The Julias (Beaury and Kelly) also connected 2 times throwing out girls stealing third base. Maybe this season wasn’t over yet.

Next up was the rematch with Smithtown who had humiliated the Lady Knights on opening day. Although they lost again, this time it was a game with the Lady Knights only losing 15-11. Batters April-Marie Ingraldi and Tylar Donohue both went 2 for 3 and had a combined 5 steals and 4 runs scored. The Lady Knight pitchers combined for 6 strikeouts which was a much more respectable showing than 0 from their first meeting. This was no longer the team of rookies that started the season.

The Lady Knights then proceeded to win their next 2 games against Tri-Village, triggering the mercy rule in both games. Catcher Daisy Battiste led the team going 5 for 5 with a walk, 8 steals, 4 RBIs and 6 runs scored. Next was pitcher/first baseman Savannah Brown who went 4 for 6 over the 2 games with a walk, 11 steals, 2 RBIs and 5 runs scored. Pitcher Giuliana Gallone had an impressive outing with 5 strikeouts over 2 innings shutting down the Tri-Village offense. Confidence was high as the Lady Knights would now face off in a double header against the number one team, the Patchogue Raiders. 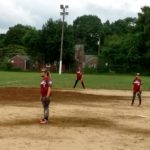 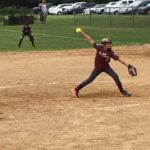 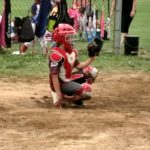 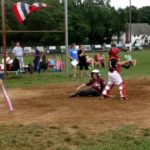 Even down two of their top players, the Lady Knights kept pace with the Raiders keeping the score tied over 4 innings thanks to the clutch pitching of Savannah Brown and Sammy Schifellite who combined for 10 strikeouts and only 4 walks over 6 innings. Unfortunately, it wasn’t enough as the Raiders showed why they were undefeated by scoring 6 runs in the final 2 innings to end the game 11-5. The Raiders looked poised to chalk up yet another win in game 2 but not so fast. The Lady Knights out for revenge exploded out of the gates scoring 12 runs in the first inning, a season high. Second baseman Molly Hillen had 3 steals, scored 3 runs and had an RBI. Right Fielder Alyssa Iglesia scored 4 runs had 2 RBIs and stole home. The Lady Knights then dominated the second inning putting up 14 more runs and doing what no team in the league had done up to that point: deliver the Raiders their first defeat.

With the win against the Raiders, the Lady Knights now had the playoffs within their sights. This team that started the season 0-4 now needed just one win to secure the last remaining spot in the playoffs, but time was running out to complete the season and Mother Nature wasn’t cooperating as rain pounded the field at their last opportunity to play. But these girls weren’t going to let mud stop their run for the playoffs so after 7 bags of Quick Dry, an army of rollers and a backpack leaf blower, the fields were ready to play and the Lady Knights took early command of the game scoring 15 runs in the first inning against Holtsville. Third baseman/shortstop Carley Fennes led the offense going 3 for 3 with 3 singles, 2 steals, 2 runs scored and an RBI. Outfielder Sophia Stallone went 1 for 2 with a single, 2 steals and a run scored and fellow outfielder Kaila Leon chalked up a stolen base and 2 runs scored. When it was all done the Lady Knights took destiny into their own hands and won 16-4 securing the last remaining playoff slot.

As the bottom seeded team the Lady Knights first playoff game was against none other than the number one seed Patchogue Raiders whose perfect season they had spoiled. Could the Lady Knights repeat and be the spoilers again sending the Raiders packing? Like a team of seasoned veterans, the Lady Knights took control of the game by 2 runs in the top of the 4th and then added a third run in the top of the 5th for good measure. It looked like the Championship was in their reach but the Raiders weren’t going down without a fight. The Raiders battled back in the bottom of the 6th scoring 3 runs and with only 1 out and a runner on third the Lady Knights magical journey looked over. But Sammy Schifellite would have none of that and took control from the mound, keeping the runner at bay and assisting on the final 2 outs to send the game into extra innings. Right out of a Hollywood movie the Lady Knights took back control when Pitcher/First Basemen Courtney McKenna loaded the bases with a single. Schifellite then hits her own single to bring in the go ahead run and when the inning was over the Lady Knights again had a 3 run lead. Then the defense took over and the Raiders were put down with no runs. The Lady Knights secured their spot in the Championship! This band of youngsters has shown the league that they are a force to be reckoned with and they have the grit and determination to go all the way.