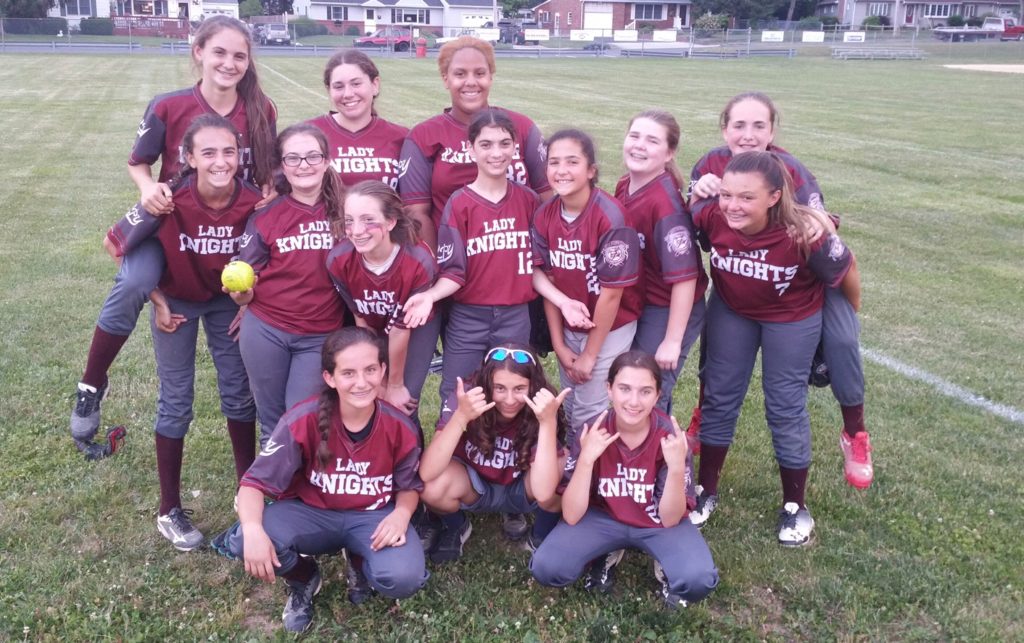 The Lady Knights had a busy end to their season in the blazing heat this past weekend. On Saturday, the Lady Knights made quick work of the Lady Owls, beating them on their home turf 10-0 in game one and 17-0 in game 2. Both Daniella Popko and Marissa Passantino each went the distance shutting out the Owls on 2 hits and 4 strikeouts. Jessica Forneiro went 5-7 in the double header with a home run (grand slam), triple, 2 doubles, 4 runs and 9 RBI. Jessica Sticco was 4-4 with 2 walks, a home run, 5 runs and 3 RBI. Marissa Passantino was also 4-4 with 2 walks, 4 runs and 2 RBI. Daniella Popko was 4-6 with 4 RBI and Jess Sommo was 3-4 with 3 RBI.

On Sunday, the Lady Knights squared off with their league rival Brentwood Panthers with the Panthers having an outside shot to win the league with a sweep. Brentwood took game one 10-2 on a masterful pitching performance, handing the Lady Knights their 2nd loss of the season. That didn’t sit well with the Lady Knights. An angry lineup scored 12 runs in the 1st, 2 in the 2nd, 5 in the 3rd and another 12 in the 4th for their largest single game output (31 runs) leaving no doubt and clinching the Spring NJBL Championship. Daniella Popko paced the hitters with 4 hits in the game while the 1st 3 spots in the lineup (Jessie Forneiro/Brenna Cumming/Jessica Sticco) each scored 5 times in the game. Marissa Passantino earned her 2nd win in as many days, going the distance.

The Lady Knights finished their season 12-2, 1st place in the American Division of the NJBL. They outscored their opponents 202-55 on the season!

Gianna Pizzulli lead the team in batting average (.593) and triples (3) while sharing catching duties and playing strong defense at 3B /OF. Her enthusiasm and electrifying style of play set the tone all season for the Lady Knights.

Jessica Sticco batted .556 and lead the team in OBP (.750), runs (27) and home runs (2) while playing stellar defense at SS, turning multiple double plays. She also burned up the base paths with her aggressive style, constantly putting pressure on the defense.

Daniella Popko was 4-1 on the mound while batting .531/.659 with 17 runs scored and 19 RBI’s. She played solid defense at multiple positions and showed excellent leadership on the field.

Sarah Gunn had a .561 OBP with 20 runs scored while shooting down numerous base runners as the primary catcher. Sarah was a rock behind the dish all season, sometimes catching double headers and playing through bumps and bruises.

Jessica Sommo batted .500 with 16 RBI’s with improved defense at 1B.

Coaches John Forneiro, Carol and Mike Passantino and Paul Ciofrone could not be more proud of this special group of girls!!! They worked hard, played hard, had fun and always pulled for each other. Congrats on a great season!!!