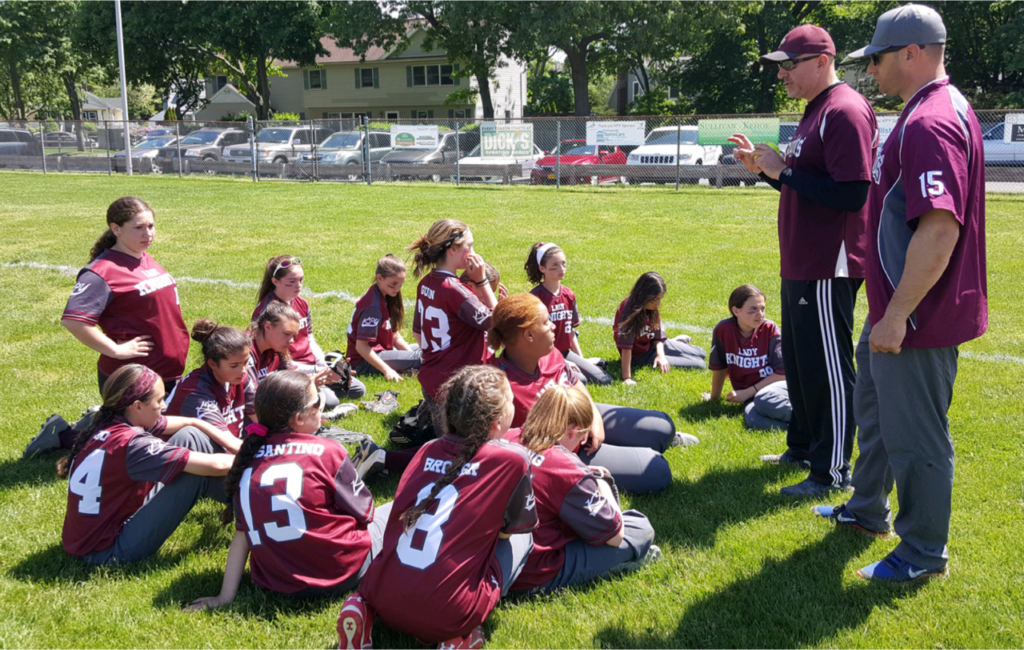 After a 2 week layoff due to rainouts, the 12u Lady Knights took on the Brentwood Panthers (who they shared 1st place with in the spring NJBL and split with in the first weekend of the season). After giving up an unearned run in the top of the 1st, the Lady Knights answered back quickly, scoring 7 runs in the bottom of the inning. Marissa Passantino started the scoring by blasting a 2 run double to center, driving in Maddie Anderson and Jessica Sticco who both singled earlier in the frame. Jessica Sommo smoked a 3-0 pitch between 3rd and short to drive in a run. Ace pitcher Gabby Amicizia helped herself with the bat, blasting an RBI single up the middle. Kiki Bass slashed a 2 RBI single to the opposite field and Michelle Defina closed out the scoring with a RBI single of her own.

Sarah Gunn snuffed out a 2nd inning rally by “Gunning” down a runner trying to steal second, firing a strike to Maddie Anderson who applied a perfect tag. Jessica Sticco ended another potential threat in the 3rd by making a running snag of a line drive up the middle and without breaking stride, stepping on 2B for the inning ending double play.

After the Panthers put up 2 more runs on errors in the 3rd to make it 7-3, Gianna Pizzulli cracked a 2 out triple to left center and would later score on a Daniella Popko rocket double to left field. In the 4th, after a Gabby Amicizia leadoff double, Kiki Bass drove her home with another line drive over the third baseman’s head. Kiki was 3-3 with 3 RBI’s for the game. The Lady Knights would score 2 more in the 6th highlighted by a Michelle Defina 2 RBI single. Michelle went 2-2 with 3 RBI’s and a walk.

On the mound, Gabby Amicizia was absolutely dealing, slinging a complete game (7 innings), giving up only 5 hits, 1 earned run, 2 walks and punching out 12 batters. She also went 3-3 with a double, RBI and 3 runs scored to take home Player of the Game honors.

The Lady Knights played only one game on Sunday as Marissa Passantino, Gianna Pizzulli, Daniella Popko, Sarah Gunn, Jessica Sommo and Michelle Defina were all selected by their respective in-house teammates to play in the Player’s Choice Game later in the afternoon. Awesome job ladies! Marissa took home the game’s MVP award with the game winning hit and Jessica won the home run derby!! Congrats!

The Lady Knights (6-1) will look to extend their 5 game winning streak on Friday, May 26th at 5:30pm, under the lights at the East Islip Marina vs the Islip Owls.